B3-HE-M0-TH (BEHEMOTH) is a Boss robot in Memories of Mars.

The boss was previously called the Juggernaut in season 8 (november 2019 - march 2020) prior to the official release v1.0.

The Behemoth is located in the center of the Haas Crater.

It will only fight inside the crater and can't go outside. 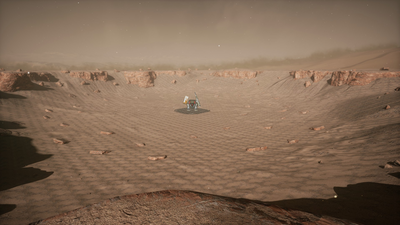 Once the Behemoth is defeated, use your Cutting Torch to scavenge the Boss' heart and 5 broken parts around (worm-like corpses aka tentacles).

First things first, the boss is not hard to kill. It just needs method and time. Even for a solo player.

There are 3 phases which indicate the boss state of health :